This is the preserved website for the Fall 2016 course.

Some things about the course are likely to change substantially for Fall 2017, but you can see what was done in the Fall 2016 course here.

The solutions to Final Exam are here: Final Exam Solutions. (I promise, no Harambe mentions, other than in quotes.)

Here are some interesting submissions for Problem Set Omega (roughly grouped by topic). Thanks for all the entertaining and illuminating submissions! 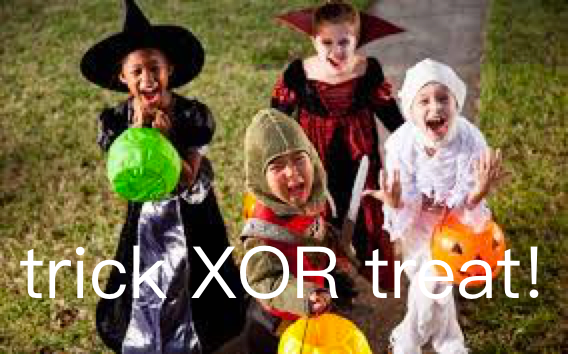 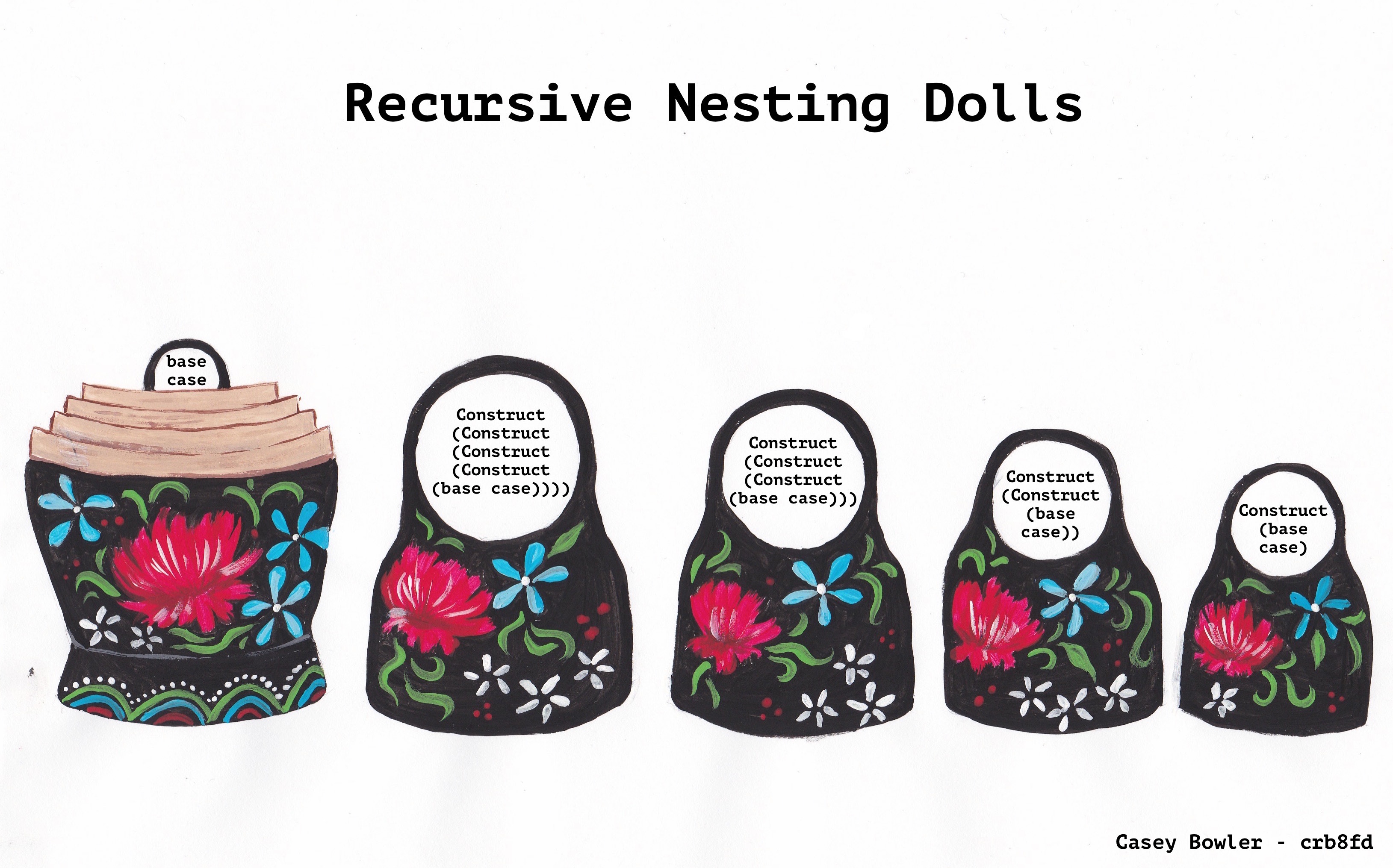 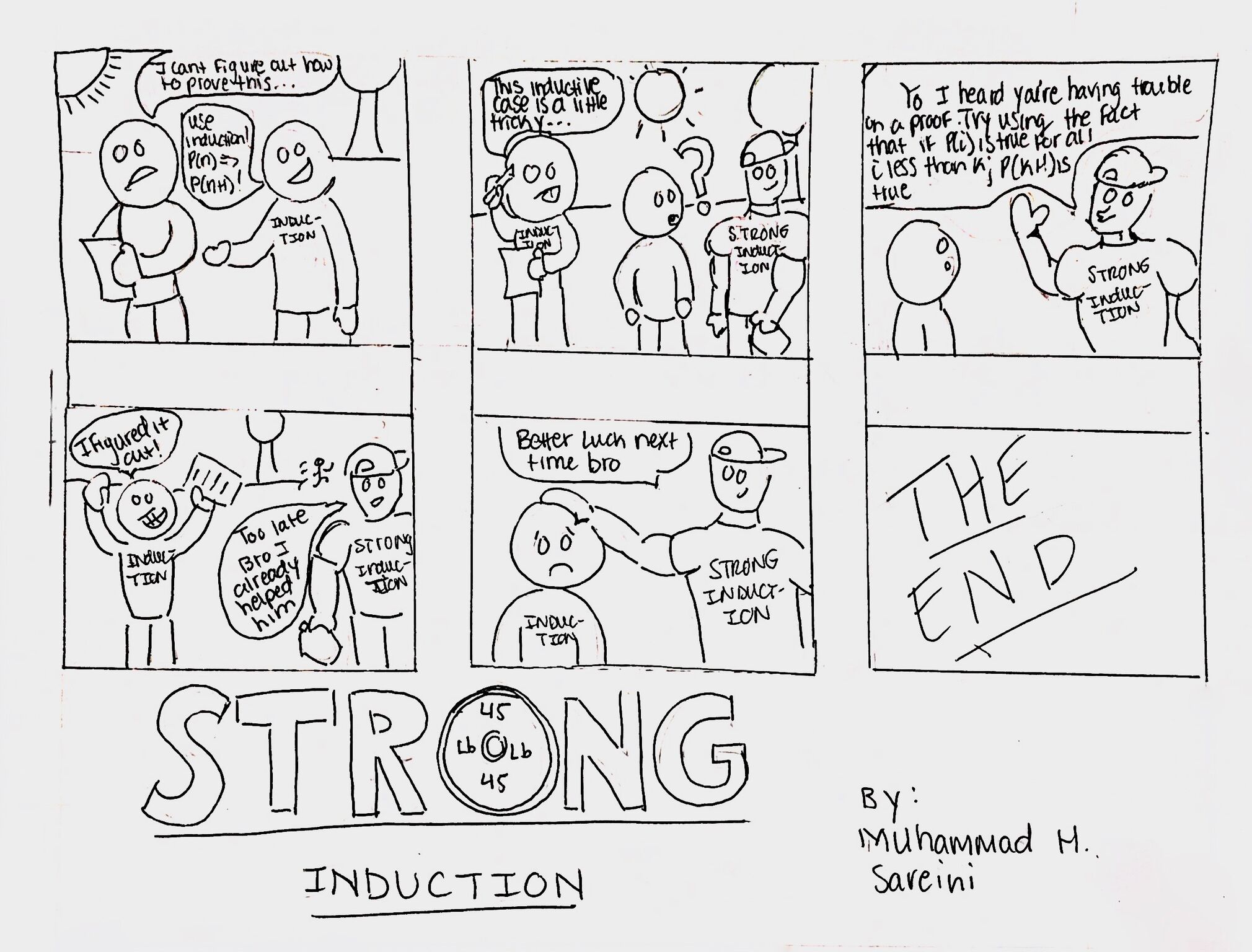 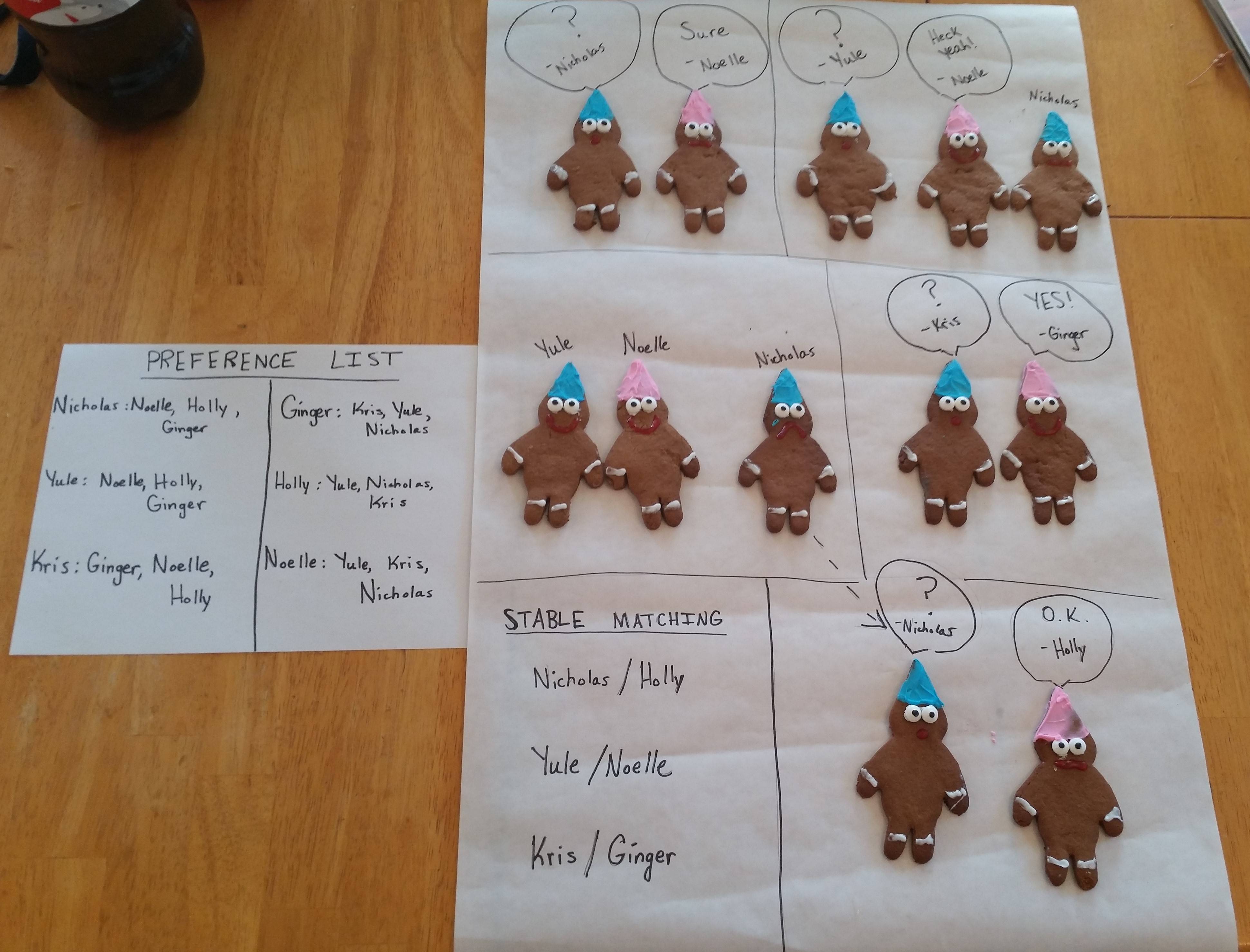 Stable matching as told by six gingerbread gnomes looking for love. Their preference lists are ranked from most preferred to least preferred. Nicholas proposes to the first on his list - Noelle. She accepts since she is not paired with anyone. Then Yule also proposes to Noelle who is currently matched with Nicholas. Since Noelle much prefers Yule above Nicholas, she happily accepts Yule’s proposal and Nicholas is kicked out of the pairing. Kris and Ginger are each other’s top choices, so Ginger accepts Kris’s proposal. Now Nicholas can propose to his second choice, Holly, who, although she prefers Yule, will settle with Nicholas since Yule is already happily paired with Noelle. The stable matching is listed at the bottom of the picture, and it is stable because there is no pair in which one member prefers someone else who also prefers them. With these specific preference lists, this is the only stable matching that could occur.

Your final (optional) submission for Problem Set Omega is due by 11:59pm tonight (Tuesday, 6 December). You may revise and update earlier submissions until this deadline.

The final exam is scheduled by the registrar for Saturday, 10 December, 9am-noon in our normal classroom. See the Final Exam Preparation handout for more information and some practice problems.

(More psO submissions will be posted on the course site later…)

After you have tried to solve the practice problems on your own, you can obtain solutions to them using this form: https://goo.gl/forms/qZVZJD8HHMc2C5XQ2.

Lighting of the Lawn is tonight! (Starts around 7pm)

If you would like to present something to the class, you need to submit Problem Set Omega by Sunday, 4 December at 6:29pm. Your submission should include an answer to “Presentation option” question:

Presentation option: if you would like to present in class Tuesday, write a brief explanation of what you would like to do and how much time you are requesting for it. You can also include anything you want to make a compelling case for why your project should be selected (depending on how many requests for presentation their are, it may be necessary to select only as many as fit into the class).

Your final (optional) submission is due Tuesday, 6 December. You may revise and update earlier submissions until this deadline.

The final exam is scheduled by the registrar for Saturday, 10 December, 9am-noon in our normal classroom. See the Final Exam Preparation handout for more information and some practice problems.

Security: without $K$, it is hard to learning anything interesting about $M$ from $E(K, M)$.

Why is $\oplus$ (xor) such a useful operator for cryptography?

Perfect cipher (Claude Shannon, 1940s). The ciphertext reveals no information (other than maximum length) about the plaintext.

Why is a one-time pad impractical for most purposes? How do you break a “two”-time pad?

We stand today on the brink of a revolution in cryptography. The development of cheap digital hardware has freed it from the design limitations of mechanical computing and brought the cost of high grade cryptographic devices down to where they can be used in such commercial applications as remote cash dispensers and computer terminals. In turn, such applications create a need for new types of cryptographic systems which minimize the necessity of secure key distribution channels and supply the equivalent of a written signature. At the same time, theoretical developments in information theory and computer science show promise of providing provably secure cryptosystems, changing this ancient art into a science.
Whit Diffie and Martin Hellman, New Directions in Cryptography, November 1976

Goal: Alice and Bob agree on a secure key $K$, over an insecure channel with no prior agreement.

How do we know Alice and Bob will agree on the same key, $K$?

What would an eavesdropper need to do to learn $K$?

How can we compute a stable matching without revealing sensitive preferences?

Problem Set Omega is due on Sunday, 4 December or Tuesday, 6 December (see problem set for details). It is not like the others, and counts as a “bonus” optional assignment.

The final exam is scheduled by the registrar for Saturday, 10 December, 9am-noon in our normal classroom. See the Final Exam Preparation handout for more information on the final and some practice problems.

Ali G on Science (possibly offensive, watch at your own risk!)

The final exam is scheduled by the registrar for Saturday, 10 December, 9am-noon in our normal classroom. The final will cover everything in the course, with an emphasis on the most important concepts that have appeared in at least two places.

The format will be fairly similar to Exam 1 and Exam 2, but because of the extended time for the final, and the desire to give as much opportunity as possible for students to demonstrate what you can do, will be a bit longer than those exams.

As with Exam 1 and Exam 2, you will be permitted to use a single paper page of notes that you prepare and bring to the exam, but no other resources. It is fine to collaborate with others to prepare your notes. The page should be no larger than a US Letter size page ($8.5 \times 11$ inches), and you may write (or print) on both sides of the page.

Unlike the previous exams, you must turn in your notes page with your exam. If you would like to keep your own copy of it, you should make a copy to save before the exam.

Although the exam covers the whole class, you should not be surprised if it includes problems for you to demonstrate:

Consider the Turing Machine, $M_X$, defined below. (The $\text{\bf -}$ symbol denotes a blank square, which may not appear in the input. Every square to the right of the last input symbol is initially blank.) Hint: for questions 5 and 6 you should be able to use similar techniques to how we reasoned about state machines, but need to also take into account the tape (so instead of using the invariant principle for states as before, now you need to consider it for full machine configurations).

Challenge 7. From Class19: Determine the carinality of the set of all Tree objects (as defined on PS8), and provide a convincing proof supporting your answer.

Henry’s proof is below:

The set of Tree objects is countable.

It is possible to imagine a mapping that links a tree to a stree, representing its structure, and a list of its labels, “in-order.” This is effectively “breaking apart” the tree into its components, resulting in two more manageable data types, or one element of the set defined above.

The function is defined more rigorously below, in two parts:

Combined (the relation being defined for the proof):

This relation is defined for all trees, making it total, and produces a unique stree-sequence combination for each tree, making it injective.

Because we have defined a total injective relation between the trees and another set which is known to be countable, the set of all trees must be countable.

Its a good idea, of course, to read this carefully and ask questions about anything that is unclear.